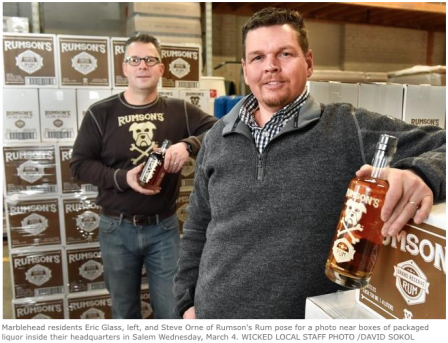 MARBLEHEAD
Partners Eric Glass and Steve Orne admit part of the lure of the rum business is the romanticized version of pirates.

The pair, second cousins and best friends, launched Rumson’s Rum, named for Glass’s dog, on Dec. 5 and it’s been pretty much smooth sailing ever since.

“You hope it will be like this … but we’ve blown away expectations,” Glass added.

In only three months Rumson’s Rum is already on shelves in 65 different locations, some as close as Three Cod Tavern and Shubie’s to as far south as Truro and as far west as Worcester. Glass said he expects they will be in Springfield by the end of the week.

Getting to the launch point, however, wasn’t quite as swift.

In February 2012, Glass quit his job in consumer health products to look into setting up a rum distillery. Glass said he always loved rum, which he calls the forgotten spirit, and it was time to do something fun in terms of making a living. He joked that he envision himself polishing a big copper still with all it’s tubes and spouts but that idea was quickly dropped.

“I did my homework … on paper I know how to distill but I still struggled,” he said. “I didn’t think I could make the kind of spirits I like.”

That is largely because Glass likes aged rum. The base rums he and Orne work with from a distillery in the Caribbean, range from three years old to 23 years old and are aged in used American oak bourbon barrels. 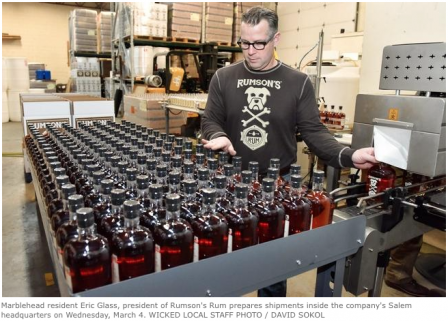 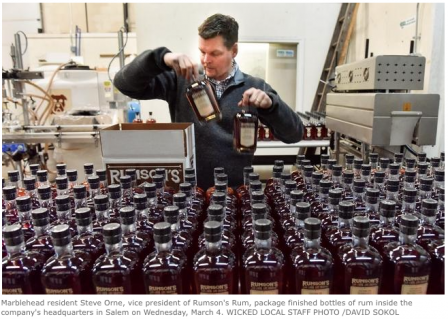 Knowing he needed a partner, Glass reached out to Orne, who said it wasn’t a hard sell to bring him on board.

At the time, Orne and his wife had just sold a small chain of clothing stores and he was casting around for a new entrepreneurial adventure. He also liked the fact that while no one in their families were in the liquor business history tied both of them to it. Both are Marblehead natives and both families were at one point shipowners and rum was big business. Now, blending it, is their business.

Their philosophy is simple, “life lived, life enjoyed.” In their downtime Glass said he and Orne like to ski, surf and boat and they wanted a rum to reflect that lifestyle.
“We have adventures,” Glass said.

Rumson’s Rum is about sitting with friends and swapping tales not about getting drunk and creating tales, he explained.

After blending and tasting and more blending and tasting Orne and Glass came up with four distinct rums that they love. A straight up rum that Glass calls very good, a grand reserve he’s dubbed exceptional, a spiced rum he’s labeled a treat and a coffee flavored rum that he said is flat out decadent. 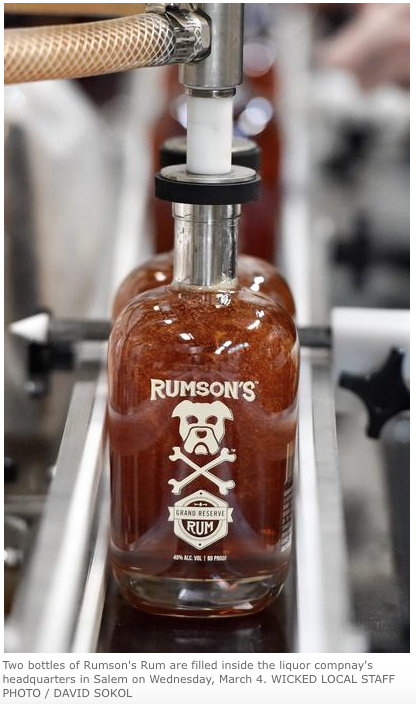 “The grand reserve is a little sweeter and has a butterscotch taste,” he said. “The spiced rum has a stronger butterscotch taste with a little cinnamon at the end and the coffee is like a decadent Dunkin Donuts espresso with a hint of vanilla. It’s sweet.”

Orne said what sets Rumson’s apart is the fact it has a great intensity that makes it perfect for sipping straight but it also works well in cocktails.

“We truly wanted to market an exceptional rum,” Glass said.

And it seems they are.

Orne said most stores that he visits take all four brands once they’ve tasted them, which is great business but has also created a good sort of problem. With only three vehicles licensed for deliveries, Orne and Glass have both been on distributing duties and “It’s really pressured us to get a distributer,” Glass said..

But that is not a bad place to be for a three month old startup.

“I thought it would be a much longer time to get space on (liquor store) shelves but we’ve had 100 percent conversion,” Orne continued.

Glass calls their success a little good timing and a little happenstance. Whiskey has had it’s revival, vodka and all it’s flavors has had it’s day and both Orne and Glass feel rum is on the cusp of a break out and they’re ready to ride the wave.

“It’s been a lot of fun,” Glass said. “It really has and it’s gone better than I ever expected.”

To learn more about their story, recipes and a list of places where Rumson’s Rum is available www.rumsons.com.